Happy Holidays and welcome back, folks! Last week on The Corporate Data Show, Eric Quanstrom, CMO of Cience, and I had a chat about Building Your B2B Brand.

So for anybody that lives under a rock, Cience is a company that combines people, product, and process to create product pipeline. Those are your four “P’s”, if you will. A lot of people think of Cience as an outbound or outsourced SDR service, and they also have a number of software products that they marry up with.

THE NAME OF THE GAME

Eric says, “The name of the game is to help our clients grow, and that's what we do!”

EMM tried this same track for a few years, I think we had eight folks doing it. We ate our own cooking over here as well, and it was a tough job. Especially if you have a niche market to keep being able to feed leads into the campaigns, and keep them rolling for long periods of time, a lot of companies fail. They all make a good earnest try, and then they're just like, “I’m hiring it out”. Cience has had luck however; they’ve grown their organization to north of 1200 folks, and on that journey they’ve helped a lot of businesses large and small.

Here at EMM, we’ve tried over-standardizing the process for training our own people and I like to think that, because we’re in the outbound business, we’re better than 98% of people at our whole package on outreach for outbound, inbound, follow up, and after lead care. If you miss one of those items, that’s what causes your results to be halfsies and that’s what drags your program.

Folks out there reading, Eric and I talked about brand building. And we actually talked about the podcast as an example of a soft demand metric. He comes on the show, we get some likes, we get some new traffic to the site, but then what? That’s all part of it, at least in our business, and Eric helped straighten this out because my business is a little dysfunctional; whose isn’t?

What is B2B Brand Building? To EMM, in the sales and quota marketing world, that means you don't have to tie a lead quota to it. Nobody wants to be spinning their wheels, generating no demand and no eyeballs, so I was curious how Cience handles it. I can share my method because it is really simple: we take 20% of the budget and we allow it to go to things we can’t attribute.

“I like to think of “brand” as an invisible container of associations, beliefs, and feelings about a particular company whenever that name is mentioned. You know I think Jeff Bezos is famous for the quote, “Your brand is what people say about you when you’re not in the room,” and I tend to believe that’s pretty accurate”.

START FROM THE OUTSIDE IN

Building a brand is all about starting from the outside in, rather than the inside out. This means the ability to plot a course as a business for what you should be known for, what you want to be associated with your business, where your customers are, how to put yourself in the path of them finding you, and then associating your business with your areas of promise. A very external view that has to be answered largely in the mind of your would-be prospects, your would-be buyers. So, it’s where you bring a new buyer's journey into how you think about what activities you’re going to execute…marketing-wise, sales outreach-wise, to form that brand.

This may be a little confusing, but I’ll split it one time: When we do outbound, we’re checking for that business fit: where our customer lives, finding that name, doing some of that attribution work on the front end and then similarly we end up (because we’re not as good at it), skimping on the inbound attribution. We know our website has to look as good as a sales brochure. As a data company, we can’t have our documentation look unprofessional. As a marketer who’s always been focused on ad ROI, attributions are a big topic.

A lot of new school marketers really get wrapped around the axle when they’re very pedantic and extreme about attributing everything. Eric commented that’s a little bit of fools gold or a red herring, so to speak. There are things you will never be able to attribute, things that cause people to buy or not buy and reasons why someone will or will not do business with your company that you will never know.  Your biggest enemy isn’t no, it’s no decision. No decision often will be painted as a bunch of other dispositions in a sales cycle because people are generally not assholes; they’re simply looking for straight answers.

SO WHAT'S THE ANSWER?

That’s the variable. They don’t know, their boss doesn’t know, you know it’s not a priority for them to give you those answers. They’re not necessarily lying, they just might not be able to get an answer. I always tell my sales people that just because somebody seems to speak an untruth, doesn’t mean they’re a liar. It might mean they’re just uninformed. I like to use Hanlon’s Razor theory: if you can attribute stupidity or malice, attribute stupidity first. So I say, “Ah they’re ignorant, they don’t know”. Hell, that’s what every legal call of my life is like (hahaha)!

Back to branding, Eric points out one of the things that’s most important about a brand, is the brand's contribution to a sales cycle in the four walls that you’re not in. If you think about any sales cycle, (I’m a big believer and I think that the trends and all the data support this, especially in B2B) when you are in a non-transnational sales cycle, a consultative sales process or something for a high ticket value, something more than you would normally fit into (say a corporate credit card without review) you better believe that that sale is going to have some democratic properties on the buy side.

In other words, it won’t be just one person, a sole decision maker making that choice. It’s three or four people, maybe more making the decision. I suppose it depends on the size of the company, but the complete buying party can have figures of up to ten people at times. Eric added that’s what Gardner, Sirius Decisions, Forrester and a lot of the analyst firms are kind of reporting.

WHAT THE HECK IS FOMU?!

According to Eric, the buying group is doing nothing but getting larger these days, especially in the macro economy that we are in. Those trends are going to exacerbate further because people don’t want (chuckles) the cousin of FOMO (Fear Of Missing Out), FOMU (Fear Of Messing Up). No buyer wants to mess up any decision of relative importance as identified by a dollar value.

“Nobody got fired for buying IBM”, is that another saying? Greatest marketing ever done. Nobody got fired for buying Zoominfo, probably. Not to keep complimenting Zoominfo, I need to find some other people to compliment, but they do kick ass right now.They've rolled up a lot of their relevant competition very smartly and are a big publicly traded company now, and those are elements of brand, no doubt about it.

Older public companies are losing that marketing grip they have, and newer public companies have very specific branding that point at a niche they solve, instead of a broad list of solutions. To sum it up, they look at some of the challenges people have with branding, and look at more detail and more variables.

I encourage everybody to checkout Cience, they have a good plan. I’ve actually never been convinced before that branding is worth any money at all, and what the hell? I’ll give it a shot.

If anybody wants to get in touch with Eric, he’s a pretty easy target. There’s very few, relatively speaking, Quanstroms in the world, so if you stumble over to LinkedIn and do a search he’ll be one of the few that show up. It was great having Eric, and I hope everyone has a lovely Holiday. 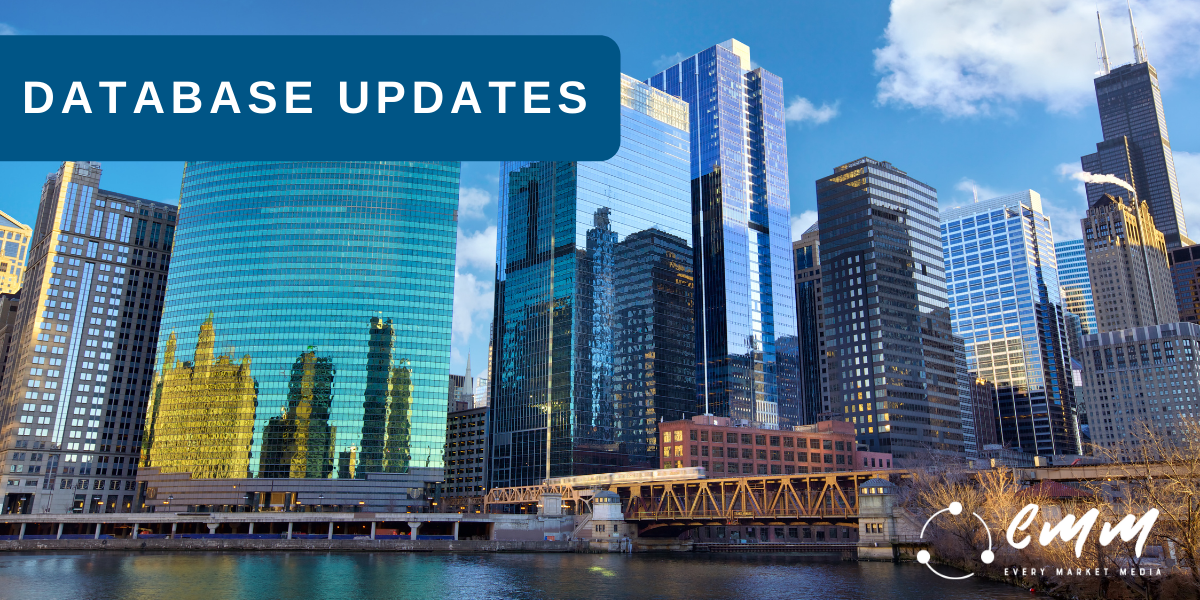 Data News US B2B Data US B2C Data
Hi there, Data Dean reporting:
Our latest EMM Companies (B2B) Update, 3.21.1, has been released!
Further down, you will find all of our periodic updates on...

We’re excited to be delivering a freshly validated file just in time for maximizing pipeline into the New Year.